How long until WW3 ?

What do you think? Take the poll On Wayin 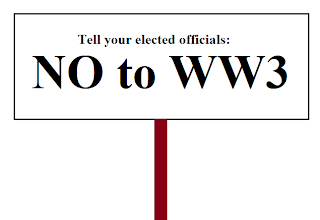 The minute an armed conflict starts with either Iran or Syria, it will be the start of WW3.
Why is it that the UN did not intervene in Syria? Why is it that regardless of the insistence of Israel to strike Iran the US is hiding from their prime minister's requests?

The answer is simple: Either one of those interventions would start WW3, and European & US leaders are not ready to throw everything away yet. The real rulers of the World are ready, as they are loosing the game.

Europe; Israel and the US would face a formidable enemy: The combination of China; Russia; and the Arab world. That would force this alliance to use nuclear weapons to defeat such a coalition.

Do not think that such a conflict would leave you untouched, and that you would be able to live your life as you always did while American soldiers are dying. God be with you and protect you the day such War starts, because none of us, anywhere on Earth would be spared.
Posted by Flavio Antonino at 12:47 PM No comments:

The dumber you are, the less money you make

"The dumber you are, the less money you make" statement by Neil Boortz

On Labor Day, Neil Boortz, criticizes car advertisements. To emphasize his view on the types of car buyers, and the types of ads the manufacturers air. "You will not find this type of ad when it comes to selling a Mercedes."

The type of ad is not what concerns me, it is the comparative between poor & dumb.