A directed-energy weapon (DEW) is a ranged weapon system that inflicts damage at a target by emission of highly focused energy. (Wikipedia)

The basic concept behind Excalibur was conceived in the 1970s by George Chapline, Jr. and further developed by Peter L. Hagelstein, both part of Edward Teller's "O-Group" in LLNL. After a successful early test in 1980, in 1981 Teller and Lowell Wood began talks with Ronald Reagan about the concept. These talks, combined with strong support from a like-minded group that met at the Heritage Foundation, were a major part of the series of events that ultimately led Reagan to announce the Strategic Defense Initiative (SDI) in 1983. 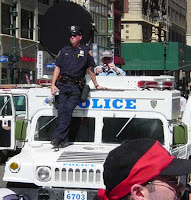 When the next World conflict occurs, you will see all those hidden weapons come out in the open.
You will see those DARPA robot super soldiers by the thousands...
Posted by Flavio Antonino at 11:00 AM