State of The Union Address and FISA Memo

President Donald Trump will deliver his first formal State of The Union address at 9 pm Eastern time on Tuesday, January 30th, in front of the House and Senate. 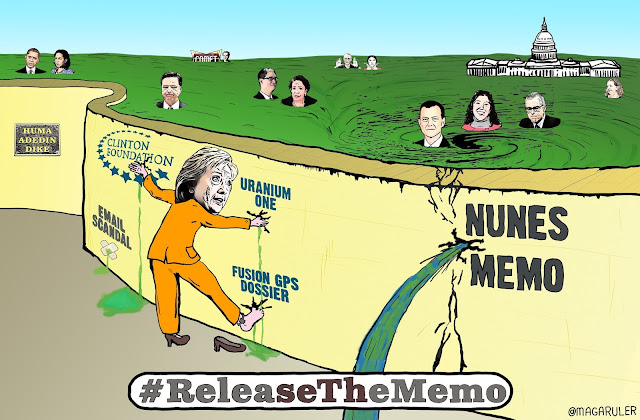 What will it be? What will he say? 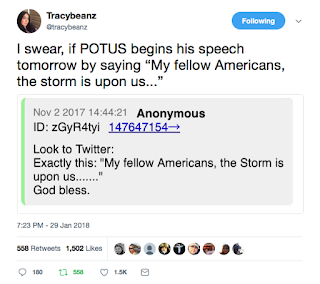 It could very well be an interesting and unusual speech, as POTUS demonstrated time and again.

There is much happening in our Government that involves the Deep State, or also called 'The Swamp'.

Here is what POTUS said a year ago:

For too long, a small group in our nation’s Capital has reaped the rewards of government while the people have borne the cost.

Washington flourished – but the people did not share in its wealth.
Politicians prospered – but the jobs left, and the factories closed.
The establishment protected itself, but not the citizens of our country.
Their victories have not been your victories; their triumphs have not been your triumphs; and while they celebrated in our nation’s Capital, there was little to celebrate for struggling families all across our land.

That all changes – starting right here, and right now, because this moment is your moment: it belongs to you.
It belongs to everyone gathered here today and everyone watching all across America.
This is your day. This is your celebration.
And this, the United States of America, is your country.

What truly matters is not which party controls our government, but whether our government is controlled by the people.
January 20th 2017, will be remembered as the day the people became the rulers of this nation again."

On August 3rd, I typed: POTUS surrenders to Deep State.
Boy! Was I WRONG !
I am no tactician, when it comes to handle conflict, but POTUS and his advisors sure are.
Their act was to deceive the Swamp that they were being sucked in. Yet it was the opposite.
This Battle to retake America from the Globalist Cabal is a tough one. To keep our Sovereignty and not give in to the New World Order, is going to be quite a task. The enemy is motivated, and if cornered may give us big and devastating surprises.

Posted by Flavio Antonino at 8:06 AM