Earth and the Universe in Scriptures


The Book of Genesis (Vatican copy) 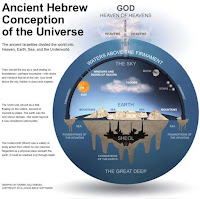 The Book of Enoch

The Ends of the Earth

The Luminaries of Heaven 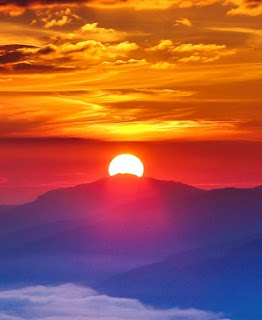 72:1 The Book of the Itinerary of the Luminaries of Heaven: the position of each and every one, in respect to their ranks, in respect to their authorities, and in respect to their seasons; each one according to their names and their places of origin and according to their months, which Uriel, the kodesh malak who was with me, and who also is their guide, showed me -just as he showed me all their treatises and the nature of the years of the world unto eternity, till the new creation which abides forever is created.
72:2 This is the first commandment of the luminaries: The sun is a luminary whose egress is an opening of heaven, which is located in the direction of the east, and whose ingress is another opening of heaven, located in the west.
72:3 I saw six openings through which the sun rises and six openings through which it sets. The moon also rises and sets through the same openings, and they are guided by the stars; together with those whom they lead, they are six in the east and six; in the west heaven. All of them, are arranged one after another in a constant order. There are many windows both to the left and the right of these openings.
72:4 First, there goes out the great light whose name is the sun; its roundness is like the roundness of the sky; and it is totally filled with light and heat.

From 72:5 to 72:34 Enoch explains how the seasons and the length of years, months and days are defined by the Great Luminaries according to God.

72:35 Thus this is the order for the course of the movement and the settlement of the sun -that great luminary which is called the sun, for the duration of the years of the universe -in respect to its going in and coming out.
72:36 It is that very luminary which manifests itself in its appearance as YAHWEH has commanded that it shall come out and go in, in this manner.
72:37 And neither does it diminish in respect to its brightness nor take rest but continue to run day and night. As for the intensity of its light, it is sevenfold brighter than that of the moon; nevertheless, the sun and the moon are equal in regard to their respective sizes. 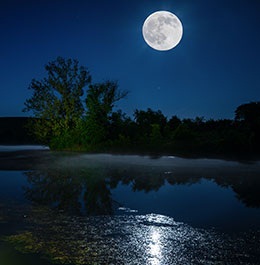 73:1 After I saw this set of regulations for the sun I saw another set of regulations concerning the minor luminary whose name is moon.
73:2 Its roundness is like the roundness of the sky, and the wind drives the chariot on which it rides; and it is given light in varying measure.
73:3 It's coming out and its going in change every month. It's days are like the days of the sun; and when its light becomes evenly distributed then it amounts to one seventh of the light of the sun.
73:4 It the moon rises in this manner: Its head faces the easterly direction, coming out on the thirtieth day, on that day, that is, on the thirtieth day, it comes into existence, and it appears with the sun in the gate through which the sun exits; and you have the beginning of the month.
73:5 Considering half of it to be divisible into seven parts, the whole disk of it is without light, with the exception of one-seventh part of the fourteenth part of the light of the sun, one seventh of its half light.
73:6 On the day when it receives one-seventh part of its one half, as the sun sets, it becomes equivalent to one-seventh light of one half of it.
73:7 Then when the sun rises, the moon rises together with it, taking a portion of one half of its light; that night the moon, just beginning its monthly journey on its first lunar day, sets with the sun and becomes dark, in respect to its thirteen parts that night. On that day it rises and shines with exactly one-seventh part of its semicircle.
73:8 Then it comes out and recedes toward the east away from where the sun rises, continuing to be brighter in one sixth of one seventh of one half of the light of the sun during the remaining days.

Then, Enoch goes on describing:

When speaking of the Luminaries, the Stars and other celestial bodies, Enoch refers to them as living entities that follow Gods orders.

1 Then the Lord answered Job out of the whirlwind, and said,
2 Who is this that darkeneth counsel by words without knowledge?
3 Gird up now thy loins like a man; for I will demand of thee, and answer thou me.
4 Where wast thou when I laid the foundations of the earth? declare, if thou hast understanding.
5 Who hath laid the measures thereof, if thou knowest? or who hath stretched the line upon it?
6 Whereupon are the foundations thereof fastened? or who laid the corner stone thereof;
7 When the morning stars sang together, and all the sons of God shouted for joy?
8 Or who shut up the sea with doors, when it brake forth, as if it had issued out of the womb?
9 When I made the cloud the garment thereof, and thick darkness a swaddlingband for it,
10 And brake up for it my decreed place, and set bars and doors,
11 And said, Hitherto shalt thou come, but no further: and here shall thy proud waves be stayed?
12 Hast thou commanded the morning since thy days; and caused the dayspring to know his place;
13 That it might take hold of the ends of the earth, that the wicked might be shaken out of it?
14 It is turned as clay to the seal; and they stand as a garment.
15 And from the wicked their light is withholden, and the high arm shall be broken.
16 Hast thou entered into the springs of the sea? or hast thou walked in the search of the depth?
17 Have the gates of death been opened unto thee? or hast thou seen the doors of the shadow of death?
18 Hast thou perceived the breadth of the earth? declare if thou knowest it all.

23 I was set up from everlasting, from the beginning, or ever the earth was.


25 Before the mountains were settled, before the hills was I brought forth:


26 While as yet he had not made the earth, nor the fields, nor the highest part of the dust of the world.


27 When he prepared the heavens, I was there: when he set a compass upon the face of the depth:


28 When he established the clouds above: when he strengthened the fountains of the deep:
29 When he gave to the sea his decree, that the waters should not pass his commandment: when he appointed the foundations of the earth:
30 Then I was by him, as one brought up with him: and I was daily his delight, rejoicing always before him;
31 Rejoicing in the habitable part of his earth; and my delights were with the sons of men.
32 Now therefore hearken unto me, O ye children: for blessed are they that keep my ways.
33 Hear instruction, and be wise, and refuse it not.

Except among Biblical apologists to science, it is generally agreed that the Bible describes an immovable earth, not a sphere, but a circle, with 4 corners on pillars, and a sky dome called firmament.
Below, a view of Earth at High altitude courtesy of a privateer. The balloon reached 119,485 feet (or 22.629 miles) before it ruptured.