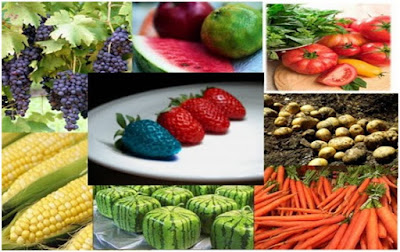 A GMO (genetically modified organism) is the result of a laboratory process where genes from the DNA of one species are extracted and artificially forced into the genes of an unrelated plant or animal. The foreign genes may come from bacteria, viruses, insects, animals or even humans. Because this involves the transfer of genes, GMOs are also known as “transgenic” organisms.

This process may be called either Genetic Engineering (GE) or Genetic Modification (GM); they are one and the same. Read more...

So the question is, what are you growing since you started eating GM foods?

What is going to happen to human DNA?
What will our children look like?
How much testing was done?
For how long?

What are the long term (decades) effects on humans?
This question will be answered 20 years from now. We will then be able to notice the effects of GMO's on the physical attributes of humans.

If you distrust or do not believe in what the Bible says, you may want to skip this next section.

I don't want to rock your boat, but without Noah's boat, God's RESET, wouldn't have worked.
I believe that prior to 'The Flood', Man was more advanced than we are today. And I believe genetic manipulations were a common practice in those days.

What happenned after Genesis 6:12 ?
'The Flood' happened. God destroyed all that Man had corrupted. God promised that he will never again use water to destroy. He did however promised us Fire.

Matthew 24:37But as the days of Noah were, so shall also the coming of the Son of man be.

Now, let's come back to secular facts about GMO's.

Three things you should know: 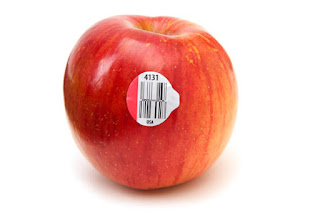 Although they seem like a nuisance, the stickers or labels attached to fruit and some vegetables have a very useable function for consumers. The PLU code, or number printed on the sticker, also tells you how the fruit was grown.

Here are the basics of what you should know:

Incidentally, the adhesive used to attach the stickers is considered food-grade, but the stickers themselves aren’t edible.

Remember that Labelling is NOT mandatory on US territory.
NO LABEL => likely to be a GMO.

Posted by Flavio Antonino at 7:40 AM